“Herman was absolutely wonderful at reducing the seemingly monstrous difficulty of public speaking down to specific and learnable concepts and techniques! His passionate, warm, and humorous lessons resulted in everyone there having a great time while learning valuable life skills. I absolutely recommend this presentation coach in New York to anyone who is looking to improve their public speaking skills.”
Jonathan D Huang
Read more reviews.. 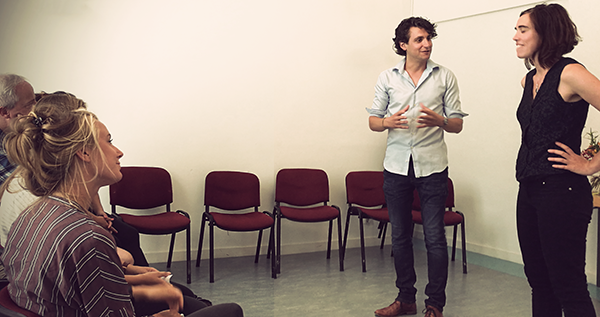 Presentation coach Herman Otten is the face behind PublicSpeaking.NYC. Herman (July 4th, 1982) graduated as an actor in the Netherlands at the Utrecht School of Performing Arts in 2008. Since 2020 he teaches his public speaking class and gives coaching in New York. He works with people one-one-on, in groups and he offers public speaking classes for New York companies.

Herman has many years of experience working with people of every ages. He has helped hundreds of people to get rid of speaking anxiety. His approach is informative, kind hearted and with great respect for every participant. He makes sure everyone feels safe to practice and improve. According to Google Reviews he is the best rated presentation coach in New York. Check out all the reviews here to read how other participants experienced working with Herman.

Often Herman teaches his group presentation training in New York. If you rather work with him one-on-one, you can go for a private session (virtual or in person). Are you looking for a presentation coach in New York for your colleagues or team? Herman is happy to organize an in-company workshop.

Herman's public speaking class was tremendously beneficial to me. We learned how to stay composed/overcome fear, techniques for commanding the room, and various vocal strategies to become more effective public speakers. Herman is a wealth of knowledge in the field, and is able to create a supportive, friendly environment.